Jon Goode is an Emmy Nominated and HBO Def Poet and renowned storyteller. Over the past decade, he has performed his unique brand of comedic and life-affirming poetry at colleges and universities, in commercials for major corporations, in interstitials for major cable networks including CNN’s “Black in America” and in venues all across the nation and the world. A national U.S. Slam Poet Champion, he is currently the resident host of the storytelling event, the “Moth Atlanta” – and serves as host to the Moth storytelling platform in cities across the globe – from Chicago to London. An accomplished author, his most recent book titled, “Mydas,” weaves a collection of stories and poetry to take us on the journey of a man who bleeds gold, a homeless woman haunted by a spirit, and a world where a virulent disease finds people afraid to touch at all.

Why is it critical that we use our right to vote?

Every four years we have the opportunity to decide who sits at the highest places of government. To not exercise your right and not exercise your civic duty is negligent. If you don’t use your voice you have no say in the way the country is going. So many people want to sit back and complain. It seems disingenuous to me to complain if you don’t vote. Here is an opportunity to guide your boat in the direction of the place that offers the safest harbor. Use it.

Do you remember the first time you voted? Tell us about it?

More than anything I remember the environment. When I am 18 it is 1989. The Reagan years are just ending and Bush the first is coming into  power. You have a very hyper-political era. The music that I’m listening to is socially charged. “Fight the Power” by Public Enemy comes out in 1989. Spike Lee’s “School Daze” comes out in 1989. Coming up as a young black man in that era — it seemed, to me at least, that to be informed, to be politically active seemed inescapable. Some of your greatest hip hop artists were supporting voting campaigns and steering their audiences to be engaged in the political process. Everything you had was telling you to vote. And so I voted.

So, I learned from a young age, that if you look up and you are not happy with how things are going in your communities – that there are meetings and places and polling booths where decisions are being made and that these are the places where you have to make your presence known and your voice heard.

In your opinion, are the stakes particularly high for this election? If yes, why? If no, why not?

I think the stakes are very high. When Donald Trump was running, I was not a fan, but I understood there were people that felt like we need to shake things up and this is the guy that can do it. In their minds what they envisioned him doing was not what he did. What he did was destroy but build nothing. He built nothing that helped them, that edified them that gave them any relief or benefit. He did nothing really for anyone except himself.

Considering this if he goes in for four more years, where he knows he doesn’t have to face another election, God only knows what he’ll do. I mean, he’ll be slapping babies and punching women in the face you just don’t know (laughs). So I think, it is more important than ever, that we have to get someone who is sensible and level-headed to try to right this ship.

What do you say to people who say, the system is rigged, our vote won’t matter?

It’s an imperfect system – with the electoral college in place it’s an imperfect system. Because you know a person can win the popular vote and still lose the election. But for there to be any chance to move or change that system, it comes down to your vote.  Like they say in “Hamilton” – “ when you got skin in the game, you stay in the game.” Nobody has more skin in the game than black people. We’ve had our skin scarred in this game. So we definitely have a vested interest in voting and affecting change in this country.

What do you think artists can do to inspire others to do their civic duty and vote?

There is a Nina Simone quote I love. It goes, ‘the duty of the artist is to reflect the times.” And I agree with Nina. A lot of my work is geared toward what goes on locally, nationally and sometimes globally. Fahamu, Okorie and I, we did something called the Hue-men project, because we wanted to speak to what was happening in this moment. And what was crazy was in the course of working on that project over a period of two weeks, Rayshard Brooks was killed. The young lady Oluwatoyin Salau was killed within those two weeks. Even in the two weeks of trying to create the art that speaks to these times – these things were happening that further informed the art in the moment.

I think that’s what part of the role of the artist — to pull the veil back a bit and present it to people in a way that they can digest it. Even if swallowing it leaves a bitter taste, it’s palatable.  You can put your eyes and put your ears and put all your senses around it. And feel it. And even if it makes you feel outrage, you can use that outrage in order to push towards some sort of change.

Want to get involved?

As part of our We Got NEXT! Vote 2020 initiative, NEXT-Atlanta has partnered with local civic organization BTheNow to support their digital campaign to equip voters with the information they need to ensure everyone’s voice is heard this election!  Visit  their website here to check your registration status, request an absentee ballot, volunteer, or download the voting toolkit.

Want to spread the word? Be sure to check out the NEXT social media Get Out the Vote library featuring empowering messages and images from several Atlanta artists — and share far and wide! This election is all about you! Use your vote and use your voice! 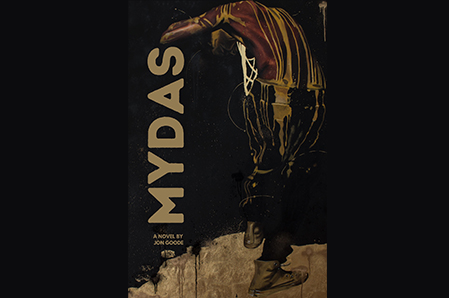 Want to hear and see more about Jon Goode, and follow his rising star?

Wish to buy his latest work?

At NEXT, we are about more than art for art’s sake. At NEXT, we believe that together we can use our individual creative expression to find solutions to our community’s intractable social challenges. Through our talents and our passion, NEXT unleashes the potential of creative communities in order to inspire countless others who share our vision to get involved.